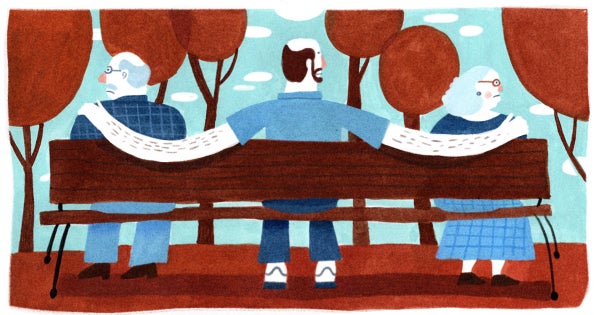 he divorce rate among most adults in the US is dropping. There is, however, one notable exception: older folks. Now, one in four people getting divorced in this country is over 50 years old, with the divorce rate among that age group having roughly doubled since 1990. Recent high-profile “gray divorces”  — boomers Bill and Melinda Gates and Jeff Bezos and MacKenzie Bezos (who’s Gen X) have announced respective splits — highlight how common they are. Researchers aren’t yet sure what effect the pandemic will have on gray divorce numbers, but it’s possible even more older couples than usual decided to call it quits in 2020.

A variety of factors explain the spike, researchers say. Among them: Divorce is much more socially acceptable today than it was in decades past, people are living longer, and women are more financially independent. More than ever, people in their 50s or 60s or older are deciding they don’t want to spend 20 or 30 more years with a spouse they’re unhappy with when they don’t have to.

“People realize they have options they didn’t have before,” says psychotherapist and divorce specialist Randy Heller, Ph.D., a collaborative facilitator and certified family mediator who practices in New York, Connecticut, and Florida. “They often feel like, ‘My kids are grown; it’s my turn now.’”

Parents who aren’t happy often wait to end marriages until their kids are adults, assuming their grown children will be better able to handle the unraveling of their parents’ partnership, Heller says. That can be true to a degree, but it’s also true that adult children will always be “the kids” in that relationship, and even when “kids” are grown up and have families of their own, the divorce of their parents can be traumatic.

Our understanding of how parental divorce affects adult children is speculative at this point, as divorce research has mainly focused on the couple and occasionally on children still living in the home, says Susan L. Brown, Ph.D., professor of sociology at Bowling Green University in Ohio.

“It’s fascinating, but few have studied it,” Brown says. “There’s a need to assess what the ramifications of divorce are for adult children.”

1. Understand your parents’ divorce might be emotional for you.

Everyone’s response is different, says Alyse November, Ph.D., LCSW, a Florida Supreme Court family mediator and collaborative divorce facilitator in Delray Beach, Florida. When their parents announce they’re divorcing, some adult children might be relieved and think, It’s about time, what took you so long? while others are totally blindsided by the news. But having strong feelings about it isn’t silly or childish.

“Adult children might go through a lot when their parents split up,” November says. “They might grieve the loss of their parents’ marriage, and the ideal of what they thought they had their whole lives.”

Men could have a particularly difficult time coping with a parent’s divorce because they might assume that since they’re adults, it shouldn’t affect them emotionally. They’re also less typically expected to take on caretaker roles in a family so they might not be as confident taking on a support role with their parents.

“I think men generally are more vulnerable to feeling like any expression of fear, sadness, or grief makes them look weak,” says psychologist and family estrangement expert Joshua Coleman, Ph.D, author of Rules of Estrangement: Why Adult Children Cut Ties & How to Heal the Conflict. “As a result, they’re probably more likely to think a stoic presentation of self is less shameful and better tolerated by others.”

In addition to disillusionment, adult children might feel shock or disbelief, sadness, anger, and even guilt when their parents divorce. They might feel guilty that they didn’t see it coming or because they’re thinking a lot about the impact, financial and otherwise, the split could have on their own families, which might feel selfish.

But it’s natural to think, “What will this change look like for me?” November says. It’s not uncommon for a divorce to cause anxiety or depression in adult children. They might be concerned about the future, how things will be managed, or concerned parents are making the wrong decision. People who don’t generally do well with change might have a particularly difficult time accepting the news, she notes.

Also common: Your parents’ split might shake your confidence in your own romantic partnership, particularly if you had no idea your parents’ marriage was troubled.

“When parents divorce, kids often think, ‘If my parents couldn’t make it, how can I?’” Brown says. “If it appeared like parents got along, a divorce can feel like a rug being pulled out from under them. That can be difficult to manage.”

If you’re having a hard time with the announcement, you might want to try therapy or join a support group where you can connect with other adult children of divorce. Because they’re dealing with a lot themselves, your parents might not be the best ears to rely on for support right now.

2. Keep your assumptions in check

That probably sounds obvious, but familiarity tends to breed contempt — meaning an adult child might say something to a  parent that they’d never say to anyone else announcing a divorce, such as “Are you crazy? You’re both 75 years old.” or “You don’t mean it, you’re just mad at him/her. It’ll blow over.” The urge to minimize or deny your parents’ divorce is happening can be particularly strong if the news came as a surprise to you.

Also, “Don’t ask them why they’re getting divorced. Frankly, it’s not your business,” says Jennifer Ciplet, co-founder of the resource app Avail Divorce. “If they offer this information without your asking, it’s okay to listen with compassion and offer your support. But ‘why’ isn’t a question that’s appropriate or helpful to ask a divorcing person of any age.”

It’s also unhelpful to suggest your parents might never find love again so should stick out the marriage, she says.

“Keep your own assumptions and worries about this person in check; it’s not helpful to the divorcing person,” Ciplet says. “Do ask, ‘How can I support you right now?’ Divorce can feel like a death; reach out and offer your support in the capacity that you’re able to.”

Be aware that parents who were depressed pre-divorce might suffer worse depression during and after one, Brown says. And parents might feel sad about the divorce even if they were the ones who initiated it.

Also important — and a caveat to the previous tip to take your parents seriously when they tell you they’re ending their marriage — is to look for sudden shifts in a parent’s behavior that might suggest cognitive decline, November says.

Symptoms of one type of dementia include hypersexuality and poor impulse control. If, say, a parent suddenly cheats on a spouse for the first time or starts dating a person outside the marriage and says they want a divorce, it’s possible that the swing in behavior stems from developing dementia, November says. So if a parent’s behavior seems very out of character, it might be worth having them examined by a doctor or neurologist to see what’s going on.

“With such a large aging population, it’s unfortunately very prevalent,” November says. “And one of the hallmarks of dementia is that they don’t realize something’s wrong with them.”

Try to frame a cognitive checkup as a win-win, November says: “Tell them, ‘If you don’t have it, great, but if you do, we’ll be proactiveabout it.”

4. Try not to get over-involved.

Many divorcing parents will, understandably, turn to their adult children for support, Heller says. This might include filling kids in on what went wrong in the marriage, which can be a tough spot to be in, she says, particularly for children who want to maintain a relationship with both parents.

A common scenario when one parent feels wronged and the divorce is contentious is for the wronged parent to enlist kids to defend his or her position. Kids, therefore, can feel guilted into taking sides, Heller says. This is not only unhealthy but often backfires, because the kids might eventually tire of being put in the middle and might start to resent the parent they tried to defend. She mentions a client whose daughter quit her job in New York to move to Florida to help her mom through her divorce, which is help her mother shouldn’t have accepted, Heller says.

It can be difficult to remain neutral, but if you want a relationship with both parents, try to keep an appropriate distance.

“It’s okay not to choose sides; you can support without choosing,” says Heller. It might also be the case that you are genuinely upset by the behavior of one parent and don’t want to maintain the relationship, she also notes, and that’s okay, too. But if you want a relationship with both of them, you’ll need to set some boundaries.

It’s possible to show compassion and empathy without taking a side, she continues, by saying something like, “I’m sad for you and sorry that happened to you, but I want to have a relationship with my [other] parent.”

Open communication is important, Heller says. It might be helpful to call a family meeting with your parents to discuss various aspects of the divorce, including support resources for them, plans regarding their expenses and your inheritance, and how best to explain the split to the grandkids, Heller says. You can also discuss appropriate ways you can show compassion and support for your parents without feeling like you need to take care of them.

“It’s an opportunity to ask how they want to handle things, and everyone can voice their concerns,” Heller says. “If you don’t speak up, you give people permission not to know, and they don’t have to do anything differently.”

Enlist the help of a therapist or mediator if your family is unable to have a construction discussion, she adds.

If your divorcing parent is having a hard time, encourage him or her to see a therapist, find a support group or get involved in the community, November says. Let parents know you want to support them but won’t give up your own life to do it.

“You don’t want the marital partnership to transfer to the adult child,” she says. “‘Being there’ does not mean replacing their partner.”

The best way to help clients is to help them get a life, November says. Not everyone is a joiner, but you can encourage a parent to get out and do things without putting pressure on them or a timeline on it.

“You can say, ‘Hey, Mom, want to maybe take a ride to the senior center?’” she suggests. “She might not be ready today, but that doesn’t mean ‘no’ forever. Ask if it’s okay to revisit the idea in a couple weeks.”

7. Find what lessons you can.

A divorce doesn’t necessarily mean one partner did anything wrong. But considering your parents’ relationship in a thoughtful way can help you strengthen your own. Ask yourself what you learned from your parents’ marriage growing up that you’re emulating in your own. A parental divorce can be triggering for kids, making them focus more on what’s going wrong in their own relationships, Heller says. But it can also shine a spotlight on what’s going right.

“Every relationship has issues. It could be infidelity, trust issues, arguing or fighting, or just getting bored,” she says. “But looking at what worked and what didn’t in your parents’ marriage helps you figure out what you want to do differently. It’s an opportunity for growth.”

"Out beyond right and wrong there is a field. I'll meet you there."
-Rumi